» FLAG SERVICE ORGANIZATION » INSIDE OUR CHURCH

Clearwater’s defining landmark for nearly 90 years, the Fort Harrison shines brighter than ever with glittering beauty and triumphant life.

A full restoration by the Church in 2009 brought it to a lustrous state outshining even its inaugural day in 1926.

The center of Scientology and community activities since 1975, the Fort Harrison now is joined with the new Flag Building across Fort Harrison Avenue at Pierce Street. Twin stars, these complementary structures of Mediterranean Revival design are connected by a third-story skywalk and by their central role in the aspirations of the Scientology religion.

The Fort Harrison forged its own chapter in Florida history, a unique chronicle of a building that has evolved over time to become a religious retreat, the home base for the Scientology religion and an important hub for local charities and events.

Duke Ellington and his star soloist Paul Gonsalves performed in a ballroom in the early 1970s.

The story of the Fort Harrison began in the late 1800s and early 1900s, when speculators and developers descended on Florida in droves, building railroads, draining marshes and erecting grand hotels sculpted with Gatsby-like splendor from Key West and Palm Beach to St. Augustine and across to the Gulf of Mexico and St. Petersburg.

Real estate broker Ed Haley staked his fame and fortune on the Fort Harrison, which became the long-reigning grande dame of Clearwater. The Clearwater Evening Sun trumpeted the November 1st, 1926, opening of the “million-dollar Fort Harrison.” Two months later, the newspaper described the New Year’s party at the hotel as “one of the most brilliant social events in the history of Clearwater.”

As one Clearwater socialite recalled in the newspaper, “The ballroom was the place to have big parties. Women would wear long gowns, beautiful jewelry and dress to the nines.”

Big bands—Stan Kenton, Duke Ellington, Count Basie—wailed out tunes, while the hotel’s own Dancing Dolls tapped and twirled, promoted as a “spectacular review.”

Even when the Florida land boom went bust and the nation staggered under the Great Depression, the Fort Harrison winter calendar included fashion shows, wedding receptions, card parties, bridge teas and Kiwanis and Rotary meetings. The Fort Harrison Orchestra performed in the ballroom. 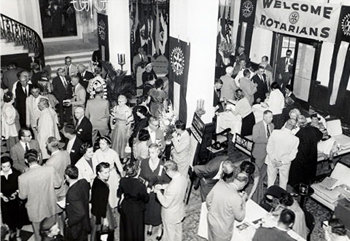 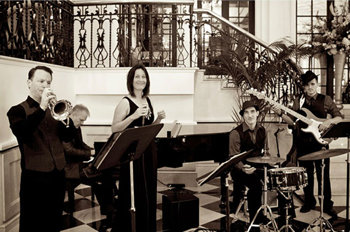 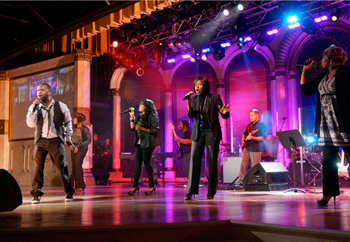 Then came World War II. The stylish furniture was packed off to warehouses and military cots filled the rooms as the hotel became home to the 588th Army Airborne Squadron.

Clearwater’s hospitality shifted from winter visitors to the men in uniform who came from all over the United States for training, supporting them with dances, teas for the wives, war bond drives and extended store hours.

The troops in turn entertained the community with Christmas parties, open houses and plays (utilizing such talents as the Army squadron’s Hollywood set designer, screenwriter and actor) and with humorous columns in the Clearwater Sun.

After the war, Oldsmobile inventor Ransom Olds traded a racetrack for ownership of the Fort Harrison and ran the hotel until his death in 1950. The Jack Tar Hotel group purchased the property in 1953, adding air conditioning, an auditorium and a wing of cabanas overlooking the pool.

The Rolling Stones wrote “(I Can’t Get No) Satisfaction” at the hotel in May 1965, after playing to 3,000 at Jack Russell Stadium during their first U.S. tour.

The Philadelphia Phillies made it their spring training home for many years.

By the 1970s, the Fort Harrison had joined the ranks of so many aging grand Florida hotels—out of date and out of touch with the new trends of year-round tourism and families headed to beaches and theme parks.

In the mid 1970s, the Church of Scientology saw past the faded façade and brought the Fort Harrison out of retirement and into service as a religious retreat and community hub, jump-starting the revival of downtown Clearwater.

An 11-month restoration of the facility was completed in March 2009, with more than 350 local tradespeople and businesses participating in stripping its 267,000 square feet to bare beams and rebuilding and refurbishing it top to bottom.

Today a religious retreat for Scientologists, the Fort Harrison also serves as a major community venue for benefit performances, such as by renowned jazz artist Chick Corea.

The 1920s framework was refitted with 21st-century infrastructure. The grand lobby regained its original wrought-iron and brass balustrades, checkerboard marble floor and gold-leafed Corinthian columns. The rooftop Crystal Ballroom where Ellington, Basie and Kenton performed was transformed far beyond its original opulence.

The Fort Harrison today serves as a religious retreat for Scientologists visiting Clearwater. It also provides a major venue for cultural and philanthropic galas, award ceremonies and benefit performances and events, utilized by dozens of nonprofit organizations.

Former Hillsborough County Commissioner Ed Turanchik said the Church “has done a tremendous job at restoration and at making it a center for civic activity.”

“The fundraisers and benefits, which help Boys & Girls Clubs and other youth groups, are very positive,” said former Pinellas County Sheriff Jim Coats. “These are very important for the community.”