Over 130 young ladies from several Tampa Bay organizations enjoyed a day just for them on Saturday the 8th of October when they celebrated the International Day of the Girl at the Church of Scientology’s religious retreat in Clearwater, the Fort Harrison. The Day of the Girl was established by the United Nations in 2012 to ensure a world free of discrimination for young women and girls.

Gracia Bennish, President of United for Human Rights Florida, opened the event, welcoming the guests. She spoke of how women must ensure that they don’t accept inequality.

“Today, confronting the challenges of gender inequality and women empowerment is here to stay,” said Ms. Bennish. “This is a huge subject, as it touches the very fabric of life. Women throughout the world are realizing they have human rights; the right to education, equal pay for equal work, reproductive rights, the right not to be enslaved or tortured, the right to democracy.”

Several stories were told of young women who are making a difference in their own ways: like the 8 year old girl who wrote to President Obama to get his help in cleaning up the lead-filled water in her small city of Flint, Michigan and actually getting his help; or the girl who raised over $100,000 selling lemonade to support a non-profit fighting human trafficking.

At Saturday’s event, an award was presented to a local 14-year-old, Sally, for her outstanding community work. Getting started when she was just 12 years old, Sally raised money for cancer research, toys for other kids and to feed the homeless. Her work has expanded rapidly, so much so that she established her own non-profit organization.

Dylan Pires, Community Affairs Director for the Church of Scientology in Clearwater closed out the afternoon by thanking the guests for all they are doing to improve our communities and told them, “The doors of The Fort Harrison are open for your non-profit organizations and any other charities that are doing what is needed to correct abuses and build a better community.”

About the Fort Harrison Religious Retreat:

Since its construction in 1927, the Fort Harrison has been the home to many charitable events and community organizations. The Fort Harrison’s current owner, the Church of Scientology, has hosted over 500 community events there since its top-to-bottom restoration in 2009. The Scientology religion was founded by humanitarian and philosopher, L. Ron Hubbard and incorporated in 1954. It has since expanded to more than 11,000 churches, missions and affiliated groups in 167 nations. 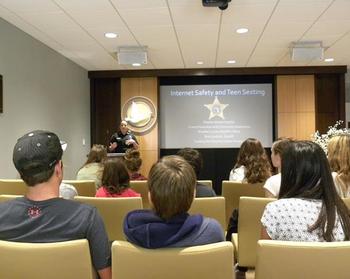