400 Pounds Gingerbread House in the Making in Clearwater

Just on time for the Holiday season a sweet, buttery and spicy scent of freshly baked gingerbread has taken hold of the kitchen in the Church of Scientology’s Flag Service Organization historic Fort Harrison retreat. Chefs have been at work building a four-foot tall replica of the historic Fort Harrison. As the delicious smell indicates, the replica is entirely made of gingerbread and candies.

The gingerbread replica of the Fort Harrison officially launches the Holiday season at the Scientology retreat, and it can be said that its creation is quite a festive adventure.

The building of the house is not all; decorating it is also a sizeable project. Standing at four-feet tall, the gingerbread house is covered of 95 pounds of frosting and some 2,000 pieces of candy. The decor also counts over 2,000 hand-painted gingerbread-cookie shingles, Christmas trees, snowmen, teddy bears and stockings

It is believed that gingerbread was brought to Europe with the Crusaders. Gingerbread was popularized by the Armenian monk, Gregory of Nicopolis (later Saint Gregory) and rapidly became a part of the Medieval European culinary tradition. Not only did ginger taste good, it also had properties that helped preserve the cake in the days before refrigeration.

Once completed the gingerbread house will stand in the Fort Harrison lobby circled by an electric train set in a winter landscape.

“The gingerbread house is a traditional Holiday activity and is one of the biggest in the Clearwater area,” said Clemence Chevrot, the Community Affairs Director for the Church of Scientology Flag Service Organization. “It is a lot of work, but the smiles on the faces of the families when they see it makes it all worthwhile.”

Pictures of the gingerbread house once completed will be displayed on the Church of Scientology Flag Service Organization Facebook page www.facebook.com/FlagServiceOrganization

For more information about the gingerbread house on please contact Clemence (727)-467-6080. 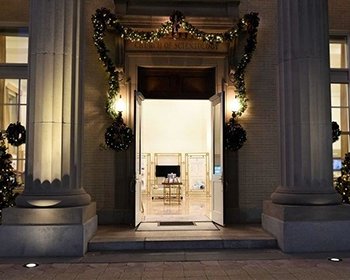