This week the Scientology Information Center located in downtown Clearwater announced the 50,000th guest has crossed the threshold and toured the Center.

Approaching its 5 year anniversary, since July 11, 2015, the Scientology Information Center has hosted visitors from all over the world, to learn about Dianetics, Scientology and the Church’s humanitarian activities. Operated by the Church of Scientology Flag Service Organization, the Center features a full biographical display illuminating the life and legacy of Scientology Founder L. Ron Hubbard: from his childhood to his career as an author, as well as his revolutionary body of work in establishing and defining the religion itself.

Inside the Center, Clearwater residents and visitors to the city’s downtown reviewed informational displays containing some 400 documentary videos covering:

“In addition to the videos and panels available in the Center, guests can grab a cup of coffee, sit down and ask any questions they may have.” said Amber Skjelset, the Center’s manager. “Just this week, in addition to locals, people visited from Poland, Germany, Canada and all over the United States while vacationing in Clearwater. They all come from different religious backgrounds and are curious about Scientology and its principles.”

For more information about the Center or its calendar of events, please contact Amber Skjelset at 727-467-6866 or amber@cos.flag.org.

The Scientology Information Center, located in the century-old Clearwater Building in downtown Clearwater, opened on July 11, 2015, and currently houses a gallery of audiovisual displays with some 400 videos. The Center is open to all and provides a self-guided tour showing basic Scientology beliefs, Churches around the world, ongoing social programs and the life of L. Ron Hubbard, Scientology’s founder. The Center offers tours to the broad public; holds concerts, theatrical performances and receptions for the community; and opens up the use of its conference room to social, civic and non-profit groups. 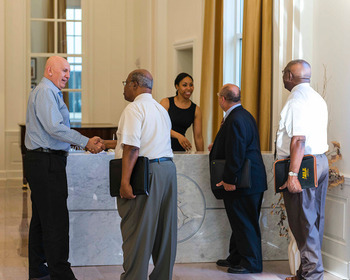 About Us
What is Scientology?
Flag on
Scientology Network
Online Courses
Bookstore
How We Help
CONTACT US
Related Sites